Next Level Inbox – How do I get my company logo displayed in the Inbox? 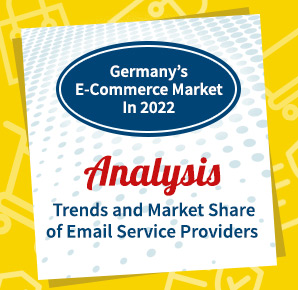 Email Marketing Activities of the 1,000 Most Successful Online Shops:

Every year since 2018, we’ve been analysing the e-mail marketing tools used by the 1,000 biggest B2C online shops in Germany as part of the e-commerce market study conducted by the EHI Retail Institute and Statista. Throughout these five years, we’ve seen consistent evidence of two things in particular:

First, e-mail remains an important and valuable communication channel. The year 2022 was no different in this regard, with 94.4% of the online shops and marketplaces surveyed offering their customers newsletter subscriptions.1

Second, nearly all shops use professional e-mail service providers (ESPs) or API-based sending services for this purpose. Given the fragmentation of the corresponding market, however, they do have a great many solutions to choose from.

Where is the ESP market headed?

Leading the pack is SAP Emarsys, which has actually given up a tiny bit of ground (0.1 percentage points), but only because we’ve adjusted our methodology and now have a slightly larger population of providers. In absolute terms, Emarsys is now used by 184 shops (compared to 183 last year). Salesforce Marketing Cloud is also holding steady in second place. Together, these two ESPs account for around a third of the market (32.3%) – meaning there’s plenty of space left for other providers. Meanwhile, there continues to be no indication of real consolidation in the offing.

Looking at the main developments of the past five years, we see that SAP Emarsys has maintained its number-one status with only minor hiccups, while Salesforce managed to nearly double its market share from 2018 to 2020 and has more or less continued its run of success ever since.

The third-place entrant, Optimizely (formerly Episerver/Optivo), hasn’t been as fortunate, having seen its own piece of the pie shrink from 12.2% (2018) to 6.7% at present. Mailchimp has also consistently been on the losing end since 2018, leaving its market share at a current 3.4%. In 2021, 40 of the top 1,000 online shops were using the solution with the simian mascot, but that number has since fallen to 29. Perhaps it’s because Mailchimp still doesn’t offer its European customers a data centre based in the EU, even four years after the GDPR came into effect…?  Whatever the reason, this was the largest absolute decline we came across in our analysis this year, with Inxmail (which has been bleeding market share since 2019) close behind. Two ESPs have lost more than half of their market share since 2018, namely Mapp (5.1% to 2.1%) and Cheetah Digital (3% to 1.1%), although the latter provider did hold stable this year. Oracle and Adobe have also been steady performers, having hovered around 3% throughout the entire period.

3 More Information about the Method and the Population

The 20 most popular Email Service Providers in Germany 2022 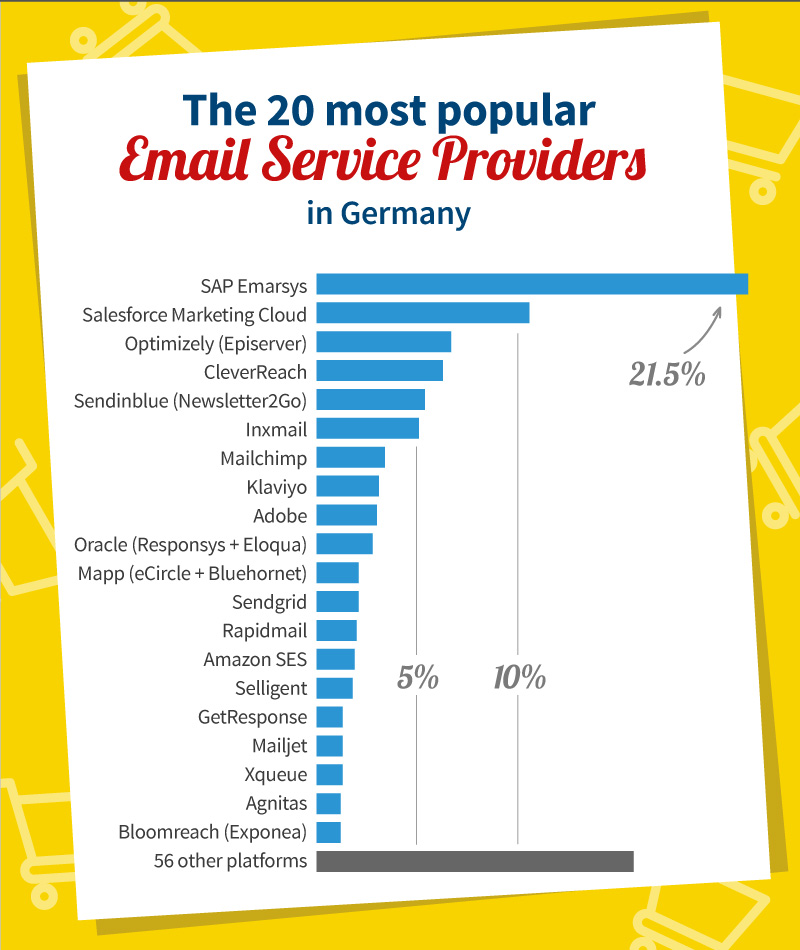 What methods do the top 1,000 online shops use to generate leads? And how much do they offer potential newsletter subscribers?

CleverReach, meanwhile, has taken over fourth place by increasing its market share from 5.8% to 6.3%. In long-term comparison, however, this ESP has actually clawed back some of the territory it previously lost; between 2018 and 2020, it accounted for at least 7% of the market. The biggest absolute gains were turned in by Sendinblue (13 shops) and Klaviyo (10 shops) – two lean email automation platforms that also make it possible to create landing pages, social advertising campaigns, and text messages. Klaviyo, which focuses on e-commerce customers, offers integration with many shop systems and also entered into a strategic partnership with Shopify in 2022. No wonder, then, that the platform has continuously gained market share in recent years. Rapidmail and GetResponse have also done well over the course of the period in question, but had no major growth to report for the past year. Another ESP of note is Bloomreach (formerly Exponea), which has grown its market share from 0.8% last year to 1.2% at present. That puts it among the 20 most-used systems for the first time as a result of its current push into the German market.

How dynamic is the market?

At this point in our analysis, one thing is already clear: We’re seeing the strongest growth in streamlined solutions that offer an array of functions, but less functional depth than the big marketing automation solutions – which in turn are stagnating. Is it possible that the major players have already squeezed all they can out of the market?

Generally speaking, our time series haven’t revealed a great deal of willingness to switch providers. We’ve examined all the shops that were always among the top 1,000 online shops in Germany over the past five years, and of these 396 shops, 266 never changed platforms (67.2%). Around 30% (118 shops) switched once, just 10 shops did so twice, and two even switched providers three times.

This confirms one of the thoughts we had before conducting this analysis: Companies that have built up the knowledge and personnel necessary to run a complex solution will think twice before switching to another one, and those that use a lean, functional solution often have neither the capacity nor a very good reason to go to the trouble of changing platforms.

We suspect this is because for most companies, the email marketing DNA they have developed internally over time ultimately wins out. For users of “simpler” solutions, this means not needing more than what they already have. Back in 2020, we put forward the theory that the market is divided into utility maximisers and cost minimisers – and that the latter have no interest in a high-end solution. This may indeed be the better option for smaller e-commerce firms given how difficult it can be to hire experts capable of tapping into the full potential of the larger platforms. After all, if you can’t take advantage of the possibilities they offer, you just end up paying more. Enterprise platforms have to impact a company’s bottom line in a way that does more than just compensate for the costs of corresponding licensing, external consulting and implementation, and internal CRM and platform specialists.

2  More Information about the Method and the Population

For our analysis, we received newsletters from 870 of the 1,000 shops in question, and the vast majority of them (96.6%) use an ESP or sending service for this purpose. Sending services are solutions that connect directly to a B2C online shop or in-house marketing system by means of APIs. A small percentage of email marketers (1.3%) use the email solution integrated into their shop system, while slightly more (1.5%) favour a sending script or solutions of their own that run on unknown sending technology. Their combined percentage (4.7%) was significantly larger last year. In other words, the trend we’ve witnessed in recent years continues: More and more B2C online stores are relying on external email service providers when it comes to things like mail server configuration, email dispatch control, and deliverability.

Among the 846 B2C webshops and hybrid B2C marketplaces in our survey, we identified a total of 65 different email distribution platforms.  We examined only the shops and marketplaces that sent out emails via an ESP, a sending service, or a distribution platform functioning as the email component of a webshop during our 12-month observation period.

As in the past, the usage of such systems is not evenly distributed. Of the 846 B2C online shops and hybrid B2C marketplaces, 84.2% employ one of the 20 most common platforms, while 38 of the platforms are used by just one or two of Germany’s top 1,000 shops.

The Market Shares of Email Service Providers Used by the Top 1,000 Online Shops in Germany3

Our total population of shops has changed slightly compared to previous years because we’ve included the senders of shop modules we were able to identify (e.g. Shopware, Shopify, Websale) and listed them along with the sending services and ESPs.

Our analysis is based on data collected between August 2021 and August 2022 on the 1,000 most successful B2C online shops and hybrid B2C marketplaces in Germany in terms of revenue (according to the 2022 EHI/Statista study of the German e-commerce market). The market share percentages have been calculated based on the number of retailers that could be identified as users of the respective senders.

1 Basis: The 1,000 B2C online shops and selected marketplaces with the highest revenue as determined by the EHI Retail Institute’s 2022 study of Germany’s e-commerce market, sorted by their e-commerce revenue in fiscal year 2021.

3 Online shops that sent out emails via a distribution platform identified as an ESP or sending service within the 12-month observation period. The market share percentages have been calculated based on the number of retailers that could be identified as users of the respective senders (n = 846).

* excluding companies that use this sending service as a back end sender of a marketing automation platform, for these companies the “front end” email service provider is listed (where the ESP was identifiable).

There are so many cloud-platforms and marketing tools available for online and email marketing that it is difficult to separate the wheat from the chaff. We help you define the most important selection criteria in line with your imperatives, goals, and existing IT infrastructure.

More from our blog:

Next Level Inbox – How do I get my company logo displayed in the Inbox?

Keeping it clean: Why List Cleaning and Deliverability Checks Pay Off in No Time

WhatsApp is back! Sort of, at least…

Study on Email Marketing in 2021

The most popular email marketing tools of the top 1,000 online shops in the U.S.